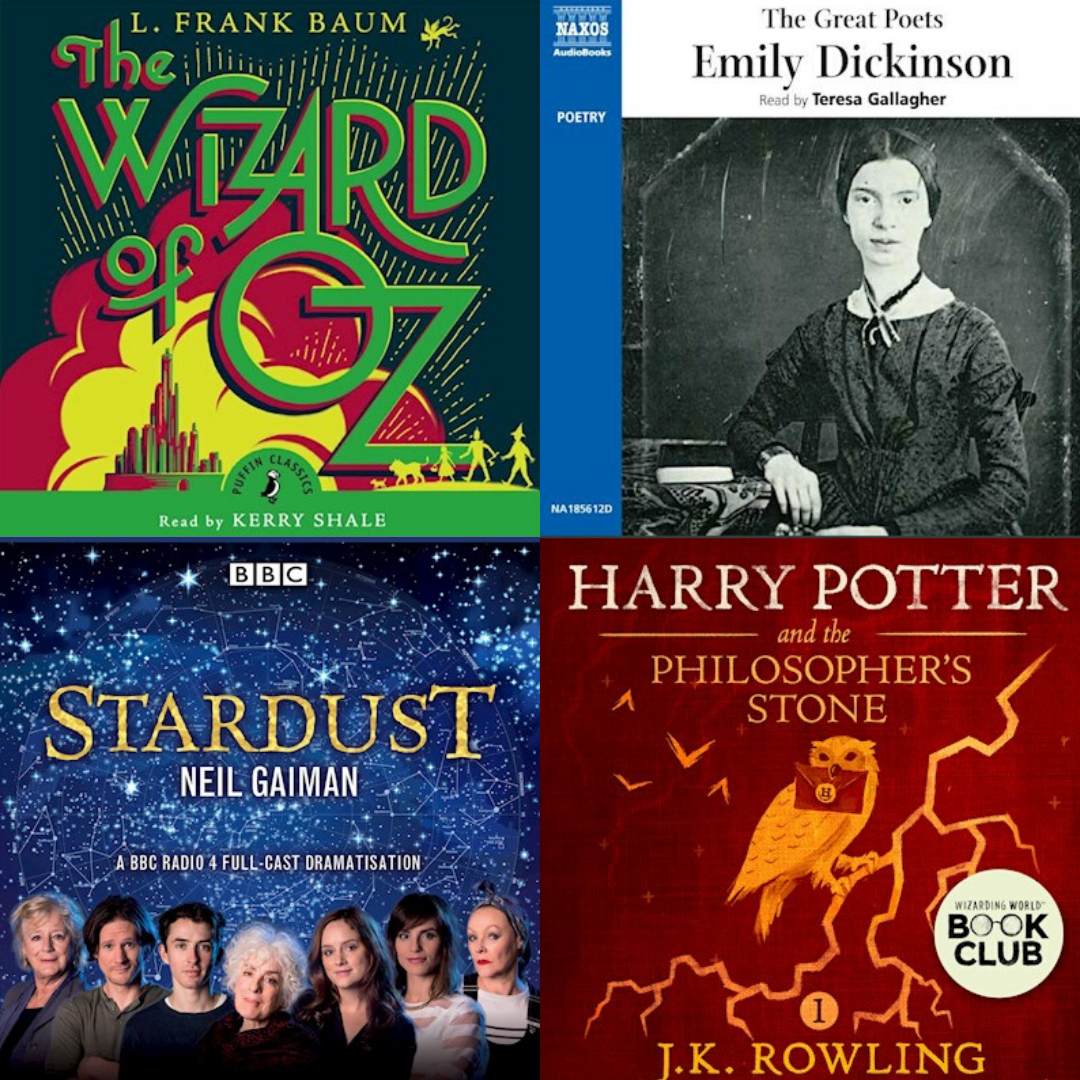 10 Audiobooks to relax with at home

You may be finding it difficult to unwind recently. When your workspace = studyspace = chilspace = sleepspace = familyspace etc, it can be hard to switch off. But as long as you have an internet connection, you can access the audiobooks in SURLY’s eLibrary, and listen to professional voice-actors read your favourite stories.

We’ve got you covered with a bunch of guilty-pleasure reads: adventure-filled romps 🗡️, romance 💕, childhood classics 🧒, poetry 📜 & more.  Whatever you read to feel comfortable and at home. Whether you listen while you’re doing chores around the house, going for a walk, curled up in bed, or in your favourite reading spot, these are the perfect audiobooks to relax to. Plus if you find yourself staring at screens all day, audiobooks are also a nice way to give your eyes a break while still enjoying a good read!

So put on your headphones, close your eyes, and let us tell you a story…

Elizabeth Bennet, one of Austen’s most enduring heroines, has four sisters, a mother desperate to find them all good marriages, and not much family wealth.

When Elizabeth meets the handsome and rich Mr. Darcy, it is not love at first sight. But there’s more to Darcy than just pride, as Elizabeth grows to realize. A charming and timeless romance and comedy of manners and morality, ‘Pride and Prejudice’ is eminently rereadable.

Austen’s books are always a calming read, best enjoyed with a hot cup of tea on a rainy day. She is deliciously witty and a master of romance. If you start this one, you won’t be able to stop until you know what happens to all those Regency-era aristocrats.

A heart-warming tale of love, sisterhood and hardship in New England during the Civil War, Little Women tells the story of the lovable March family.

Meg, Beth, Jo and Amy try to support their mother at home while their father is away at war, and enter into various scrapes and adventures as they do so. Alcott beautifully interweaves bad times and good as her characters struggle with the trials and tribulations of growing up and their relationships with one another.

A cosy novel about family, sisterhood, and finding your place in the world – plus there’s romance! ‘Little Women’ is a true comfort read if there ever was one.

MAGNUS CHASE AND THE GODS OF ASGARD – RICK RIORDAN

Magnus Chase has always been a troubled kid. Since his mother’s mysterious death, he’s lived alone on the streets of Boston, surviving by his wits.

One day, he’s tracked down by an uncle he’s never met – who tells him an impossible secret: Magnus is the son of a Norse god. The Viking myths are true. The gods of Asgard are preparing for war. Trolls, giants and worse monsters are stirring for doomsday. To prevent Ragnarok, Magnus must search the Nine Worlds for a weapon that has been lost for thousands of years.

SURLY has the entire trilogy (The Sword of Summer, The Hammer of Thor, The Ship of the Dead) in audiobook format – you can imagine a bard is regaling you with tales of modern Viking teenagers. ‘Magnus Chase’ is an adventure, sure to make you feel all sappy with its found-family vibes, and an amazing cast of diverse characters! Highlights include the genderfluid Alex Fierro (introduced in book #2, so better get reading!), and the deaf sorcerer Hearthstone.

To get started with ‘The Sword of Summer’, find it in our online catalogue here!

Challenged to retrieve a fallen star, Tristran Thorn leaves the sleepy English village of Wall and crosses into the land of Faerie and the realm of Stormhold.

Locating the star, he discovers it is no meteorite, but a young woman, Yvaine. When Yvaine evades him and escapes, Tristran discovers he is not the only one in pursuit of the star: there are dark forces in this magical land, and he must find Yvaine before she falls into their clutches.

As he does so, Tristran will uncover the secret to his own identity and a fate beyond his wildest dreams.

From the writer who brought you ‘Good Omens’, American Gods’, and ‘Sandman’. This radio adaptation is not just an audiobook, but a full production with a huge cast! Cross the barrier into this world if you want to get lost on a fantastical quest, meet witches, falling stars, and sky-pirates!

“Turning the envelope over, his hand trembling, Harry saw a purple wax seal bearing a coat of arms; a lion, an eagle, a badger and a snake surrounding a large letter ‘H’.”

Harry Potter has never even heard of Hogwarts when the letters start dropping on the doormat at number four, Privet Drive. Addressed in green ink on yellowish parchment with a purple seal, they are swiftly confiscated by his grisly aunt and uncle.

Then, on Harry’s eleventh birthday, a great beetle-eyed giant of a man called Rubeus Hagrid bursts in with some astonishing news: Harry Potter is a wizard, and he has a place at Hogwarts School of Witchcraft and Wizardry. An incredible adventure is about to begin!

Harry Potter, of course, needs no introduction. Whether this series is a precious memory from your childhood, something you still read regularly, or if you’ve never read it before, Harry Potter is a magical experience – especially when narrated by Stephen Fry! SURLY has the whole series as audiobooks, as well as Fantastic Beasts and Where to Find Them. Accio headphones!

Find The Philosopher’s Stone in our online catalogue here!

Dorothy thinks she is lost forever when a terrifying tornado crashes through Kansas and whisks her and her dog, Toto, far away to the magical land of Oz. To get home, Dorothy must follow the yellow brick road to Emerald City and find the wonderfully mysterious Wizard of Oz.

Together with her companions, the Tin Woodman, the Scarecrow and the Cowardly Lion, whom she meets on the way, Dorothy embarks on a strange and enchanting adventure.

One of the most beloved childhood classics, this book is just as fantastical an adventure as its film adaptation. There are familiar characters, as well as those that didn’t make it to the movie like a princess made of porcelain!

Born in Massachusetts in 1830, Emily Dickinson composed over 1770 poems; but apart from her closest friends, no-one knew she was writing at all. Only after her death was her astonishing output discovered and published.

A reclusive figure for much of her life, few could have imagined the range of her subjects, the intensity of her imagination or the powerful delicacy of her writing. Emily Dickinson is one of America’s greatest writers. This selection includes 147 of her best known poems, and is a perfect introduction to her unique voice.

Dickinson’s poetry is sure to make you reflect, if you let her words ‘perch in your soul…’

Find her poetry in our online catalogue here!

Everyone knows something of Shakespeare’s sonnets, even if only in memorable fragments like ‘the darling buds of may’, ‘remembrance of things past’, or ‘the marriage of minds’.

For centuries these wonderfully-crafted, intense lyrics have stood for something valued about youth, love and the emotional complexities belonging to that time of life. This new recording presents all 154 of Shakespeare’s sonnets.

What better way to de-stress than to read some of the greatest love poetry in the English language! If you want a sample first, check out Sonnets 18, 55, and 116.

Find the sonnets in our online catalogue here!

In this collection are four of the finest cases of Mr Sherlock Holmes, narrated by his faithful friend and admirer Dr Watson. What was the horror of The Speckled Band or the secret behind the curious legacy for men of red hair? These and other puzzles are solved by this bloodhound of a genius.

For the crime aficionados, why not go back to the quintessential detective? It’s ‘elementary’ that the surest way to relax is to uncover some mysteries!

SURLY also has several other Sherlock Holmes stories, including The Hound of the Baskervilles, so check those out too if you enjoy this one!

For a more modern mystery, iconic author James Patterson’s ‘Confessions’ series follows teenager Tandy as she investigates – and is investigated regarding – the murder of her parents.

As Tandy sets out to clear the family name, she begins to recall flashes of experiences long buried in her vulnerable psyche. These memories shed light on her family’s dark secrets, and digging deeper into her powerful parents’ affairs proves to be a disturbing and dangerous game. What really happened that night, and who knows what any of the Angels are truly capable of?