Finally, after a most tumultuous year we have reached the end of the semester. In the last post of the year from me (your mysterious and very tired resident blogger), we finish things off with a bang! Rather than forcing you to read all my own recommendations and strange bookish ramblings, this week we turn to you, dear readers. From classics to contemporaries, it’s time to explore what YOU were reading all year long, with the 15 most popular books from SURLY’s eLibrary! (You can sign up here if you haven’t borrowed from SURLY before.)

The Last Hours: Chain of Gold by Cassandra Clare

Cordelia Carstairs is a Shadowhunter, a warrior trained since childhood to battle demons. When her father is accused of a terrible crime, she and her brother travel to Edwardian London in the hope of preventing the family’s ruin. Cordelia’s mother wants to marry her off, but Cordelia is determined to be a hero rather than a bride. Soon Cordelia encounters childhood friends James and Lucie Herondale and is drawn into their world of glittering ballrooms, secret assignations and supernatural salons, where vampires and warlocks mingle with mermaids and magicians. All the while, she must hide her secret love for James, who is sworn to marry someone else. But Cordelia’s new life is blown apart when a shocking series of demon attacks devastate London. These monsters are nothing like those the Shadowhunters have fought before – these demons walk in daylight, strike down the unwary with incurable poison and seem impossible to kill. London is immediately quarantined. Trapped in the city, Cordelia and her friends discover that their own connection to a dark legacy has gifted them with incredible powers – and force a brutal choice that will reveal the true cruel price of being a hero.

Pride and Prejudice by Jane Austen

When Elizabeth Bennet first meets eligible bachelor Fitzwilliam Darcy, she thinks him arrogant and conceited; he is indifferent to her good looks and lively mind. When she later discovers that Darcy has involved himself in the troubled relationship between his friend Bingley and her beloved sister Jane, she is determined to dislike him more than ever. In the sparkling comedy of manners that follows, Jane Austen shows the folly of judging by first impressions and superbly evokes the friendships, gossip and snobberies of the provincial middle-class.

A Heart in a Body in the World by Deb Caletti

Followed by Grandpa Ed in his RV and backed by her brother and friends, Annabelle, eighteen, runs from Seattle to Washington, D.C., becoming a reluctant activist as people connect her journey to her recent trauma. 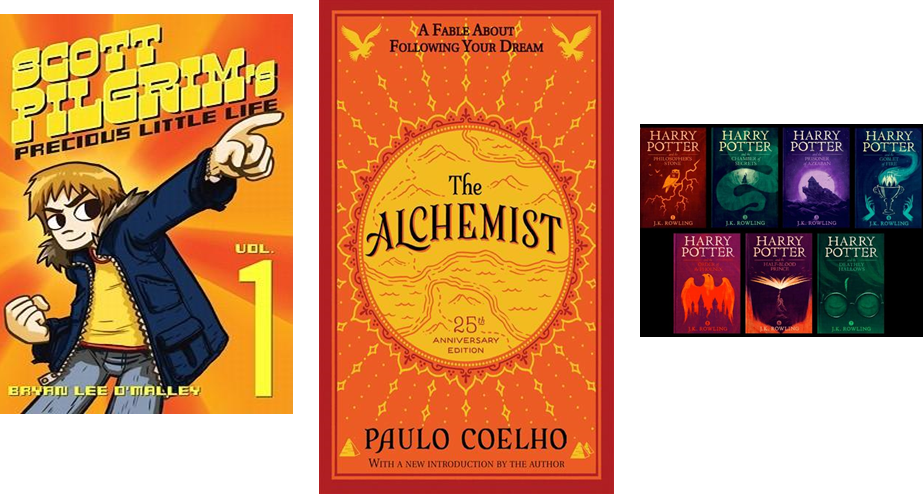 Scott Pilgrim’s life is totally sweet.
He’s twenty-three years old, he’s in a rock band, he’s ‘between jobs’, and he’s dating a cute high-school girl. Nothing could possibly go wrong, unless a seriously mind-blowing, dangerously fashionable, rollerblading delivery girl named Ramona Flowers starts cruising through his dreams and sailing by him at parties. Will Scott’s awesome life get turned upside-down? Will he have to face Ramona’s seven evil ex-boyfriends in battle? The short answer is yes. The long answer is ‘Scott Pilgrim, Volume 1: Scott Pilgrim’s Precious Little Life’.

The Alchemist by Paulo Coelho

The Alchemist has become a modern classic transforming the lives of countless readers across generations. Paulo Coelho’s masterpiece tells the mystical story of Santiago, an Andalusian shepherd boy who yearns to travel in search of a worldly treasure. His quest will lead him to riches far different-and far more satisfying-than he ever imagined. Santiago’s journey teaches us about the essential wisdom of listening to our hearts, of recognizing opportunity and learning to read the omens strewn along life’s path, and, most importantly, to follow our dreams.

Obviously this series doesn’t need much of an introduction, and it makes an appearance on ‘most borrowed’ lists every year… But in case you were wondering, the very first book was the most popular. 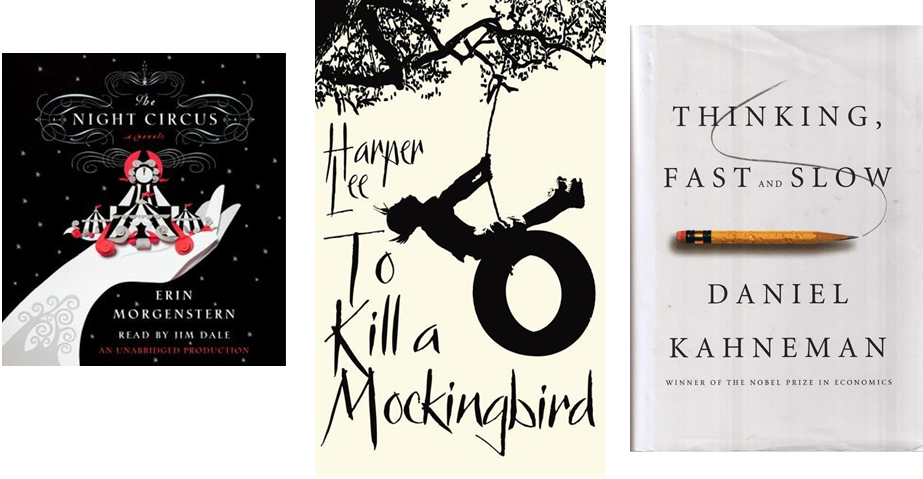 The Night Circus by Erin Morgenstern

In 1886, a mysterious travelling circus becomes an international sensation. Open only at night, constructed entirely in black and white, Le Cirque des Reves delights all who wander its circular paths and warm themselves at its bonfire. The circus seems almost to cast a spell over its aficionados, who call themselves the reveurs – the dreamers.

To Kill A Mockingbird by Harper Lee

‘Shoot all the bluejays you want, if you can hit ’em, but remember it’s a sin to kill a mockingbird.’ A lawyer’s advice to his children as he defends the real mockingbird of Harper Lee’s classic novel – a black man falsely charged with the rape of a white girl. Through the young eyes of Scout and Jem Finch, Harper Lee explores with exuberant humour the irrationality of adult attitudes to race and class in the Deep South of the 1930s.The conscience of a town steeped in prejudice, violence and hypocrisy is pricked by the stamina of one man’s struggle for justice. But the weight of history will only tolerate so much. To Kill a Mockingbird is a coming-of-age story, an anti-racist novel, a historical drama of the Great Depression and a sublime example of the Southern writing tradition.

Looks at the way our minds work, and how we make decisions. This book reveals how our minds are tripped up by error and prejudice (even when we think we are being logical), and gives you practical techniques for slower, smarter thinking. It enables you to make better decisions at work, at home, and in everything you do.

F*ck Happiness: How the Science of Psychology Ignores Women by Ariel Gore

Happiness has become big business. Books, psychologists, consultants and even governments promote scientific findings into the psychology of happiness and how it can apply to the individual and to the broader society. The problem is that almost all of this science is performed by and for straight white men. And some of the most vocal of these experts suggest that women can become happier by adopting traditional gender values and eschewing feminism.

Sceptical of this hypothesis, Ariel Gore immersed herself in the optimism industrial complex, combing the research, reading the history, interviewing the thinkers, and exploring her own and her friends’ personal experiences and desires. F*ck Happiness is a nuanced, thoughtful and inspiring account of what happiness means and to whom, how it has played a role in defining modern gender roles and power structures, and how we can all pursue joy in our lives.

Perfect for fans of Jenny Han and Sarah Dessen, this romantic and layered Own Voices debut from Abigail Hing Wen is a dazzling, fun-filled romp. ‘Our cousins have done this program,’ Sophie whispers. ‘Best kept secret. Zero supervision. ‘And just like that, Ever Wong’s summer takes an unexpected turn. Gone is Chien Tan, the strict educational program in Taiwan that Ever was expecting. In its place, she finds Loveboat: a summer-long free-for-all, where hookups abound, adults turn a blind eye and the nightlife runs nonstop. But not every student is quite what they seem: Ever is working toward becoming a doctor but nurses a secret passion for dance. Rick Woo is the Yale-bound child prodigy bane of Ever’s existence whose perfection hides a secret. Boy-crazy, fashion-obsessed Sophie Ha turns out to have more to her than meets the eye. And under sexy Xavier Yeh’s shell is buried a shameful truth he’ll never admit. When these students’ lives collide, it’s guaranteed to be a summer Ever will never forget!

Freakonomics: A Rogue Economist Explores the Hidden Side of Everything by Steven Levitt

Asking questions about human motivation and living and reaching some conclusions, this book aims to be at the heart of things we see and do and the subjects that bedevil us: from parenting to crime, sport to politics, fat to cheating, fear to traffic jams.

Connell and Marianne grow up in the same small town in the west of Ireland, but the similarities end there. In school, Connell is popular and well-liked, while Marianne is a loner. But when the two strike up a conversation – awkward but electrifying – something life-changing begins. Normal People is a story of mutual fascination, friendship and love. It takes us from that first conversation to the years beyond, in the company of two people who try to stay apart but find they can’t……

Spin the Dawn: The Blood of Stars, Book 1 by Elizabeth Lim

Project Runway meets Mulan in this sweeping fantasy about a young girl who poses as a boy to compete for the role of imperial tailor and embarks on an impossible journey to sew three magic dresses, from the sun, the moon, and the stars. Maia Tamarin dreams of becoming the greatest tailor in the land, but as a girl, the best she can hope for is to marry well. When a royal messenger summons her ailing father, once a tailor of renown, to court, Maia poses as a boy and takes his place. She knows her life is forfeit if her secret is discovered, but she’ll take that risk to achieve her dream and save her family from ruin. There’s just one catch: Maia is one of 12 tailors vying for the job. Backstabbing and lies run rampant as the tailors compete in challenges to prove their artistry and skill. Maia’s task is further complicated when she draws the attention of the court magician, Edan, whose piercing eyes seem to see straight through her disguise. And nothing could have prepared her for the final challenge: to sew three magic gowns for the emperor’s reluctant bride-to-be, from the laughter of the sun, the tears of the moon, and the blood of stars. With this impossible task before her, she embarks on a journey to the far reaches of the kingdom, seeking the sun, the moon, and the stars, and finding more than she ever could have imagined.

Moon of the Crusted Snow by Waubgeshig Rice

A daring post-apocalyptic novel from a powerful rising literary voice. With winter looming, a small northern Anishinaabe community goes dark. Cut off, people become passive and confused. Panic builds as the food supply dwindles. While the band council and a pocket of community members struggle to maintain order, an unexpected visitor arrives, escaping the crumbling society to the south. Soon after, others follow. The community leadership loses its grip on power as the visitors manipulate the tired and hungry to take control of the reserve. Tensions rise and, as the months pass, so does the death toll due to sickness and despair. Frustrated by the building chaos, a group of young friends and their families turn to the land and Anishinaabe tradition in hopes of helping their community thrive again. Guided through the chaos by an unlikely leader named Evan Whitesky, they endeavour to restore order while grappling with a grave decision. Blending action and allegory, Moon of the Crusted Snow upends our expectations. Out of catastrophe comes resilience. And as one society collapses, another is reborn.