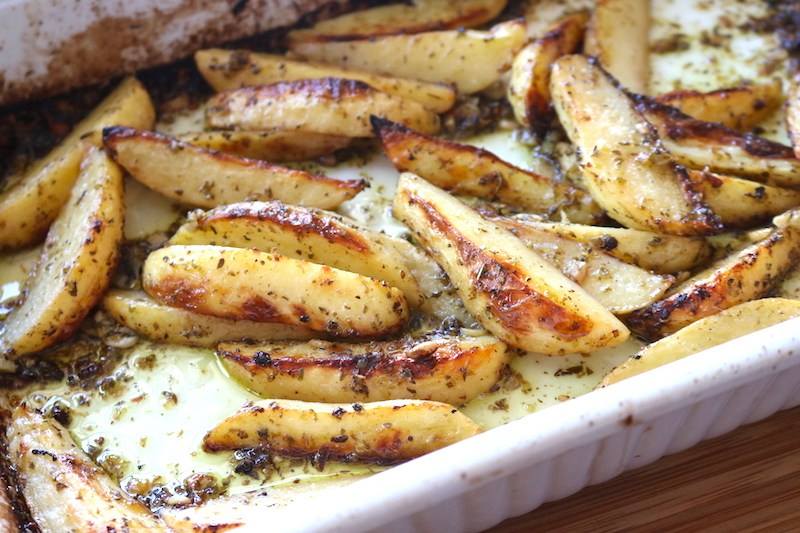 The Monash Hellenic Students' Society is dedicated to bringing all things greek culture to Monash students and the wider community. Our famous Souvlaki Day is known for filling the bellies of hundreds of students, while our annual Tavern Night provides the biggest greek party of the year!

Step 2
To prepare extra crispy lemon potatoes, cut the potatoes into wedges and place them on a large metal roasting pan.

Step 3
Add the remaining ingredients (including the semolina and the 150ml of water) into a bowl and blend.

Step 4
Pour the semolina-lemon mixture over the potatoes and season well with salt and pepper.

Step 5
Bake for 40 minutes, until a nice golden crust has formed on the potatoes; turn them out of the oven, toss them a little bit to bring them upside down, sprinkle with a pinch of oregano and put back into the oven for another 30-40 minutes. If all of the liquid has been absorbed and the pan appears to be getting dry, add 1/4-1/2 of a cup hot water into the pan or some extra lemon mixture, before they have fully browned.

The secret for these extra crispy Greek lemon potatoes is to sprinkle the potatoes with some semolina, as it helps to form a nice golden crust around them. Don’t be afraid of over baking them- they will become even more delicious!