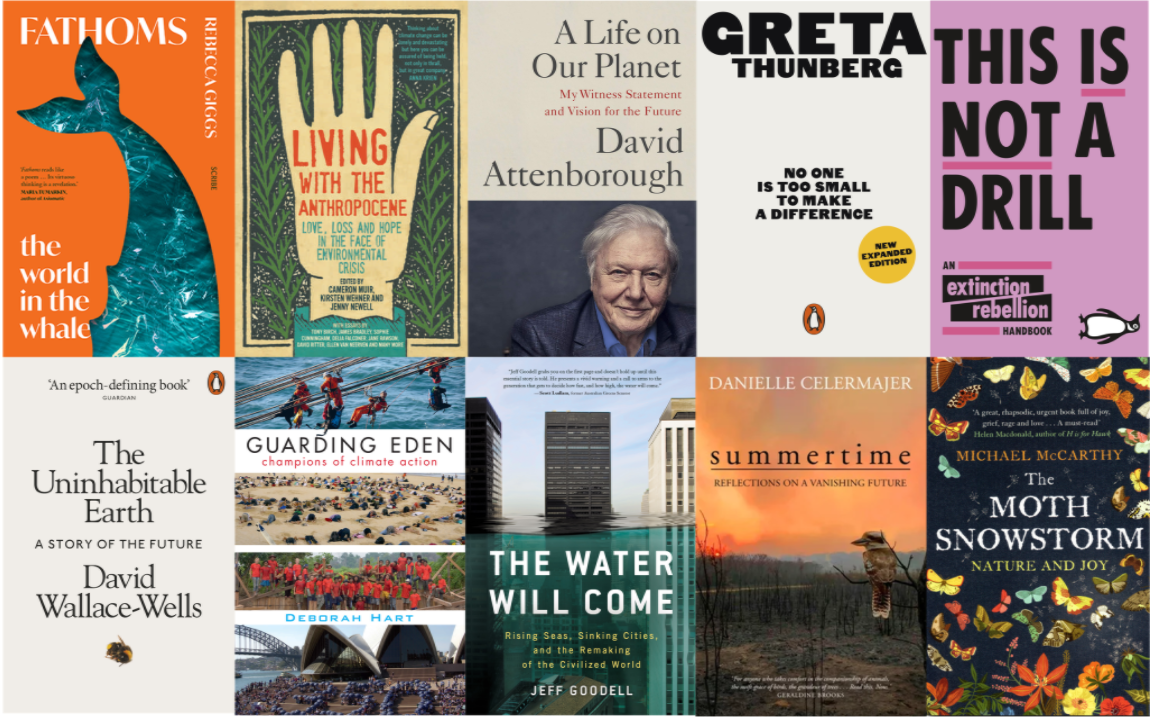 Our Earth in Crisis

Spring is finally here and I simply cannot express how grateful I am to be done with Winter. I went for a stroll recently (within my 5km of course) and was delighted by the perfumes that had begun to pervade the air as the trees started to blossom. I’m ready for the sun, wearing pretty dresses, and spending my days lounging with a well earned book.

And yet, as I reflect on everything I wish for this season to be, I can’t help but contemplate what the effects of climate change will bring for future Springs. So if you’ve forgotten all about this other crisis facing our global population at the moment, we’ve rounded up our top ten reads on the topic of climate change to remind you why we need to keep fighting and how we can take action!

Fathoms: The World in the Whale

When writer Rebecca Giggs encountered a humpback whale stranded on her local beachfront in Australia, she began to wonder how the lives of whales shed light on the condition of our seas. Fathoms: The World in the Whale blends natural history, philosophy, and science to explore: How do whales experience ecological change? Will our connection to these storied animals be transformed by technology? What can observing whales teach us about the complexity, splendour, and fragility of life? In Fathoms, we learn about whales so rare they have never been named, whale songs that sweep across hemispheres in annual waves of popularity, and whales that have modified the chemical composition of our planet’s atmosphere. We travel to Japan to board the ships that hunt whales and delve into the deepest seas to discover the plastic pollution now pervading the whale’s undersea environment.

In the spirit of Rachel Carson and Rebecca Solnit, Giggs gives us a vivid exploration of the natural world even as she addresses what it means to write about nature at a time of environmental crisis.

Living with the Anthropocene: Love, Loss and Hope in the Face of Environmental Crisis

You’re not alone. Climate change is really happening. Australia — and the world — is changing. On the Great Barrier Reef corals bleach white, across the inland farmers struggle with declining rainfall, during the 2019-20 summer over 12 million acres have burned. Young and old alike are rightly anxious. Human activity is transforming the places we live in and love. In this extraordinarily powerful and moving book, leading Australian writers come together to reflect on what it is like to be alive during an ecological crisis as the physical world changes all around us. How do we hold onto hope?

These personal stories are more than individual responses. They build a picture of a collective endeavour towards cultures of care, respect, and attention — values and actions that we yearn be reflected in the institutions that have power to act on a scale that matches the complexity and enormity of the challenge Personal and urgent, this is a literary anthology for our age, the age of humans that reflects on how we might resist, protect, grieve, adapt and unite.

A Life on Our Planet: My Witness Statement and a Vision for the Future

See the world. Then make it better.

As a young man, I felt I was out there in the wild, experiencing the untouched natural world – but it was an illusion. The tragedy of our time has been happening all around us, barely noticeable from day to day – the loss of our planet’s wild places, its biodiversity.

I have been witness to this decline. A Life on Our Planet is my witness statement, and my vision for the future. It is the story of how we came to make this, our greatest mistake – and how, if we act now, we can yet put it right.

We have one final chance to create the perfect home for ourselves and restore the wonderful world we inherited.

All we need is the will to do so.

No One Is Too Small to Make a Difference

In August 2018 a fifteen-year-old Swedish girl, Greta Thunberg, decided not to go to school one day in order to protest the climate crisis. Her actions sparked a global movement, inspiring millions of students to go on strike for our planet, forcing governments to listen, and earning her a Nobel Peace Prize nomination.

No One Is Too Small to Make A Difference brings you Greta in her own words, for the first time. Collecting her speeches that have made history across the globe, from the United Nations to Capitol Hill and mass street protests, her book is a rallying cry for why we must all wake up and fight to protect the living planet, no matter how powerless we feel. Our future depends upon it.

This Is Not A Drill

Extinction Rebellion is a global activist movement of ordinary people, demanding action from Governments. This is a book of truth and action. It has facts to arm you, stories to empower you, pages to fill in and pages to rip out, alongside instructions on how to rebel – from organising a roadblock to facing arrest.

By the time you finish this book you will have become an Extinction Rebellion activist. Act now before it’s too late.

It is worse, much worse, than you think. If your anxiety about global warming is dominated by fears of sea-level rise, you are barely scratching the surface of what terrors are possible. In California, wildfires now rage year-round, destroying thousands of homes. Across the US, “500-year” storms pummel communities month after month, and floods displace tens of millions annually.

This is only a preview of the changes to come. And they are coming fast. Without a revolution in how billions of humans conduct their lives, parts of the Earth could become close to uninhabitable, and other parts horrifically inhospitable, as soon as the end of this century.

In his travelogue of our near future, David Wallace-Wells brings into stark relief the climate troubles that await–food shortages, refugee emergencies, and other crises that will reshape the globe. But the world will be remade by warming in more profound ways as well, transforming our politics, our culture, our relationship to technology, and our sense of history. It will be all-encompassing, shaping and distorting nearly every aspect of human life as it is lived today.

Guarding Eden tells the personal stories of twelve ordinary people who were so concerned about climate change that they altered their lives to do something about it. Some did quiet backroom work in research, drafted submissions or wrote to politicians; others decided to go public, really public – one was part of the team occupying a 160-metre power-plant chimney, one went on a hunger strike publicised around the world, another started the Lock the Gate Alliance. They come from all walks of life: there’s a nurse, a musician, an insurance broker, a teacher, a lawyer, a vet. Surprisingly touching, Guarding Eden makes an issue as complex and controversial as climate change feel human and deeply real.

The Water Will Come: Rising Seas, Sinking Cities, and the Remaking of the Civilized World

What if Atlantis wasn’t a myth but an early precursor to a new age of great flooding? Across the globe, scientists and civilians alike are noticing rapidly rising sea levels and higher and higher tides pushing more water directly into the places we live, from our most vibrant, historic cities to our last remaining traditional coastal villages. With each crack in the great ice sheets of the Arctic and Antarctica, and each tick upwards of Earth’s thermometer, we are moving closer to the brink of broad disaster.

The Water Will Come is the definitive account of the coming water, why and how this will happen, and what it will all mean. As he travels across twelve countries and reports from the front lines, acclaimed journalist Jeff Goodell employs fact, science, and first-person, on-the-ground journalism to show vivid scenes from what already is becoming a water world.

I went and sat alone where Jimmy has been lying. It is way down in the bush. The light is soft, the air and the earth are cool, and the smell is of leaves and the river. I cannot presume to know what he is doing when he lies here, but it seems that he is taking himself back to an ecology not wrought by the terror of the fires, not fuelled by our violence on the earth. He is letting another earth heal him.

Philosopher Danielle Celermajer’s story of Jimmy the pig caught the world’s attention during the Black Summer of 2019­­-20. Gathered here is that story and others written in the shadow of the bushfires that ravaged Australia. In the midst of the death and grief of animals, humans, trees and ecologies Celermajer asks us to look around – really look around – to become present to all beings who are living and dying through the loss of our shared home.

At once a howl in the forest and an elegy for a country’s soul, these meditations are lyrical, tender and profound.

The Moth Snowstorm: Nature and Joy

Nature has many gifts for us, but perhaps the greatest of them all is joy; the intense delight we can take in the natural world, in its beauty, in the wonder it can offer us, in the peace it can provide – feelings stemming ultimately from our own unbreakable links to nature, which mean that we cannot be fully human if we are separate from it.

In The Moth Snowstorm Michael McCarthy, one of Britain’s leading writers on the environment, proposes this joy as a defence of a natural world which is ever more threatened, and which, he argues, is inadequately served by the two defences put forward hitherto: sustainable development and the recognition of ecosystem services.

Drawing on a wealth of memorable experiences from a lifetime of watching and thinking about wildlife and natural landscapes, The Moth Snowstorm not only presents a new way of looking at the world around us, but effortlessly blends with it a remarkable and moving memoir of childhood trauma from which love of the natural world emerged. It is a powerful, timely, and wholly original book which comes at a time when nature has never needed it more.