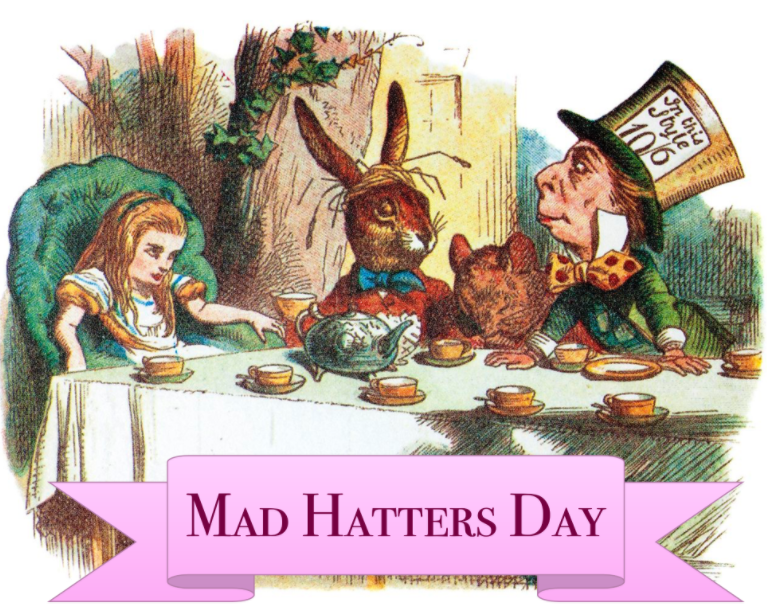 In the 150 years since its first publication, Lewis Carroll’s Alice’s Adventures in Wonderland has gifted modern society a great many things. Not only has the English language gained a number of weird and wacky words (think galumph, chortle, and vorpal), but it has also inspired a significant number of adaptations and reimaginings, with references to the tale seemingly pop up everywhere you least expect it.

So this week, in honour of Mad Hatters Day on October 6th, we’ll explore the timeless story itself and its many fantastical reimaginings – Alice in Wonderland. So what are you waiting for, grab your teacups and let’s dive down this rabbit hole! 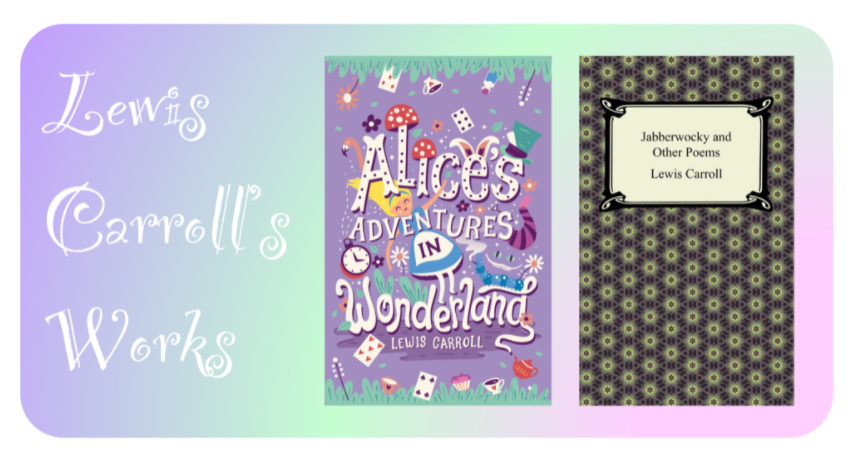 Alice’s Adventures in Wonderland tells the story of Alice, a young, curious girl who follows a white rabbit down a rabbit hole and into Wonderland. There, she encounters some of the strangest and most peculiar creatures, including the Cheshire Cat and the Mad Hatter. Carroll regularly experimented with logic, wordplay, and mathematical puzzles, successfully creating an intriguing make-believe world that appeals to both children and adults.

Jabberwocky and Other Poems

Mathematician, author, photographer, and artist, Lewis Carroll (Charles Lutwidge Dodgson, 1832–1898) is best known as the creator of Alice’s Adventures in Wonderland, but he was also a prolific poet. Over the course of almost 50 years, he created 150 poems, including nonsense verse, parodies, burlesques, acrostics, inscriptions, and more, many of them hilarious lampoons of some of the more sentimental and moralistic poems of the Victorian era.

This carefully chosen collection contains 38 of Carroll’s most appealing verses, including such classics as “The Walrus and the Carpenter,” “The Mock Turtle’s Song,” and “Father William,” plus such lesser-known gems as “My Fancy,” “A Sea Dirge,” “Brother and Sister,” “Hiawatha’s Photographing,” “The Mad Gardener’s Song,” “What Tottles Meant,” “Poeta Fit, non Nascitur,” “The Little Man That Had a Little Gun,” and many others. 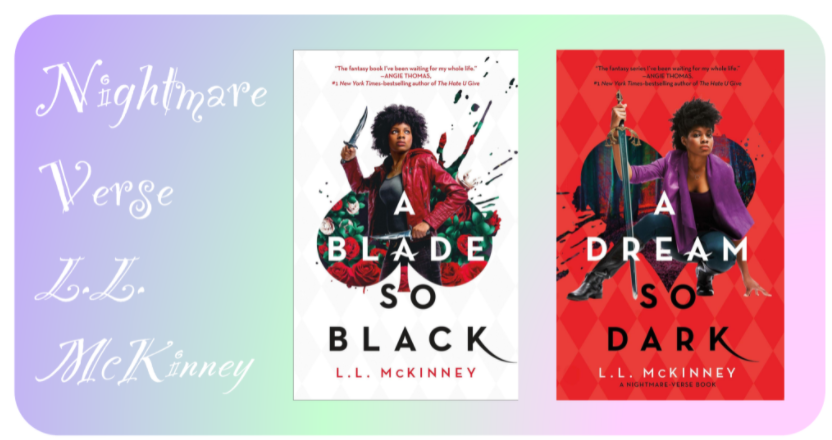 A Blade So Black

The first time the Nightmares came, it nearly cost Alice her life. Now she’s trained to battle monstrous creatures in the dark dream realm known as Wonderland with magic weapons and hardcore fighting skills. Yet even warriors have a curfew.

Life in real-world Atlanta isn’t always so simple, as Alice juggles an overprotective mom, a high-maintenance best friend, and a slipping GPA. Keeping the Nightmares at bay is turning into a full-time job. But when Alice’s handsome and mysterious mentor is poisoned, she has to find the antidote by venturing deeper into Wonderland than she’s ever gone before. And she’ll need to use everything she’s learned in both worlds to keep from losing her head . . . literally.

A Dream So Dark

Still reeling from her recent battle (and grounded until she graduates), Alice must abandon her friends to complete her mission: find The Heart and prevent the Red Lady’s rise. But the deeper she ventures into Wonderland, the more topsy-turvy everything becomes. It’s not until she’s at her wits end that she realizes—Wonderland is trying to save her.

There’s a new player on the board; a poet capable of using Nightmares to not only influence the living but raise the dead. This Poet is looking to claim the Black Queen’s power—and Alice’s budding abilities—as their own.

Dreams have never been so dark in Wonderland, and if there is any hope of defeating this mystery poet’s magic, Alice must confront the worst in herself, in the people she loves, and in the very nature of fear itself.

This is not the story of the Wonderland we know. Alice has not fallen down a rabbit hole. There is no all-knowing cat with a taunting smile. This is a Wonderland where beneath each smile lies a secret, each tart comes with a demand, and only prisoners tell the truth.

Dinah is the princess who will one day reign over Wonderland. She has not yet seen the dark depths of her kingdom; she longs only for her father’s approval and a future with the boy she loves. But when a betrayal breaks her heart and threatens her throne, she is launched into Wonderland’s dangerous political game. Dinah must stay one step ahead of her cunning enemies or she’ll lose not just the crown but her head.

Evil is brewing in Wonderland and maybe, most frighteningly, in Dinah herself.

This is not a story of happily ever after.

This is the story of the Queen of Hearts.

Dinah has been exiled from Wonderland. The vicious father she always feared has framed her for the brutal murder of her brother and turned the kingdom against her.

Now hiding in the lush and mysterious Twisted Wood with only her war steed at her side, Dinah is faced with a choice. She could leave Wonderland forever or return and fight her father for her throne—a fight she knows would only result in bloodshed.

When a chance encounter with one of her father’s long-lost enemies brings Dinah more allies than she ever could have imagined, war starts to feel inevitable. But before Dinah can lead her people into combat, she must confront certain truths about her heart and her destiny—no matter how dark those truths may be.

Revolution is rising in Wonderland.

War of the Cards

The final book in the twisted YA trilogy re-imagining of the origin story of the Queen of Hearts.

Dinah has lost everyone she ever loved. Her brother was brutally murdered. The wicked man she believed was her father betrayed her. Her loyal subjects have been devastated by war. And the boy she gave her heart to broke it completely.

Now a dark queen has risen out of the ashes of her former life. Fury is blooming inside Dinah, poisoning her soul and twisting her mind. All she has left is Wonderland and her crown, and her obsession to fight for both. But the war rages on, and Dinah could inherit a bloodstained throne. Can a leader filled with love and rage ever be the ruler her kingdom needs? Or will her all-consuming wrath bring Wonderland to its knees?

This is not a story of happily ever after.

This is the story of the Queen of Hearts. 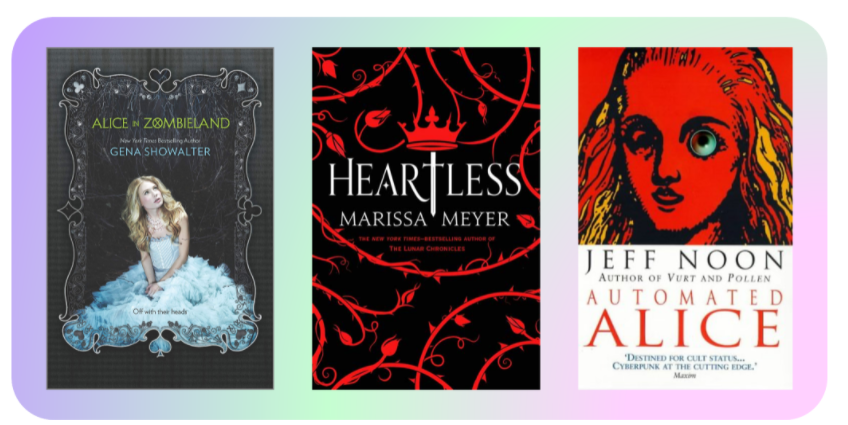 Alice In Zombieland by Gena Showalter

If anyone had told Alice Bell that her entire life would change course between one heartbeat and the next, she would have laughed. From blissful to tragic, innocent to ruined? Please. But that’s all it took. One heartbeat. A blink, a breath, a second, and everything she knew and loved was gone.

Her father was right. The monsters are real.

To avenge her family, Ali must learn to fight the undead. To survive, she must learn to trust the baddest of the bad boys, Cole Holland. But Cole has secrets of his own, and if Ali isn’t careful, those secrets might just prove to be more dangerous than the zombies.

Long before she was the terror of Wonderland—the infamous Queen of Hearts—she was just a girl who wanted to fall in love.

Catherine may be one of the most desired girls in Wonderland, and a favorite of the unmarried King of Hearts, but her interests lie elsewhere. A talented baker, all she wants is to open a shop with her best friend. But according to her mother, such a goal is unthinkable for the young woman who could be the next queen.

Then Cath meets Jest, the handsome and mysterious court joker. For the first time, she feels the pull of true attraction. At the risk of offending the king and infuriating her parents, she and Jest enter into an intense, secret courtship. Cath is determined to define her own destiny and fall in love on her terms. But in a land thriving with magic, madness, and monsters, fate has other plans.