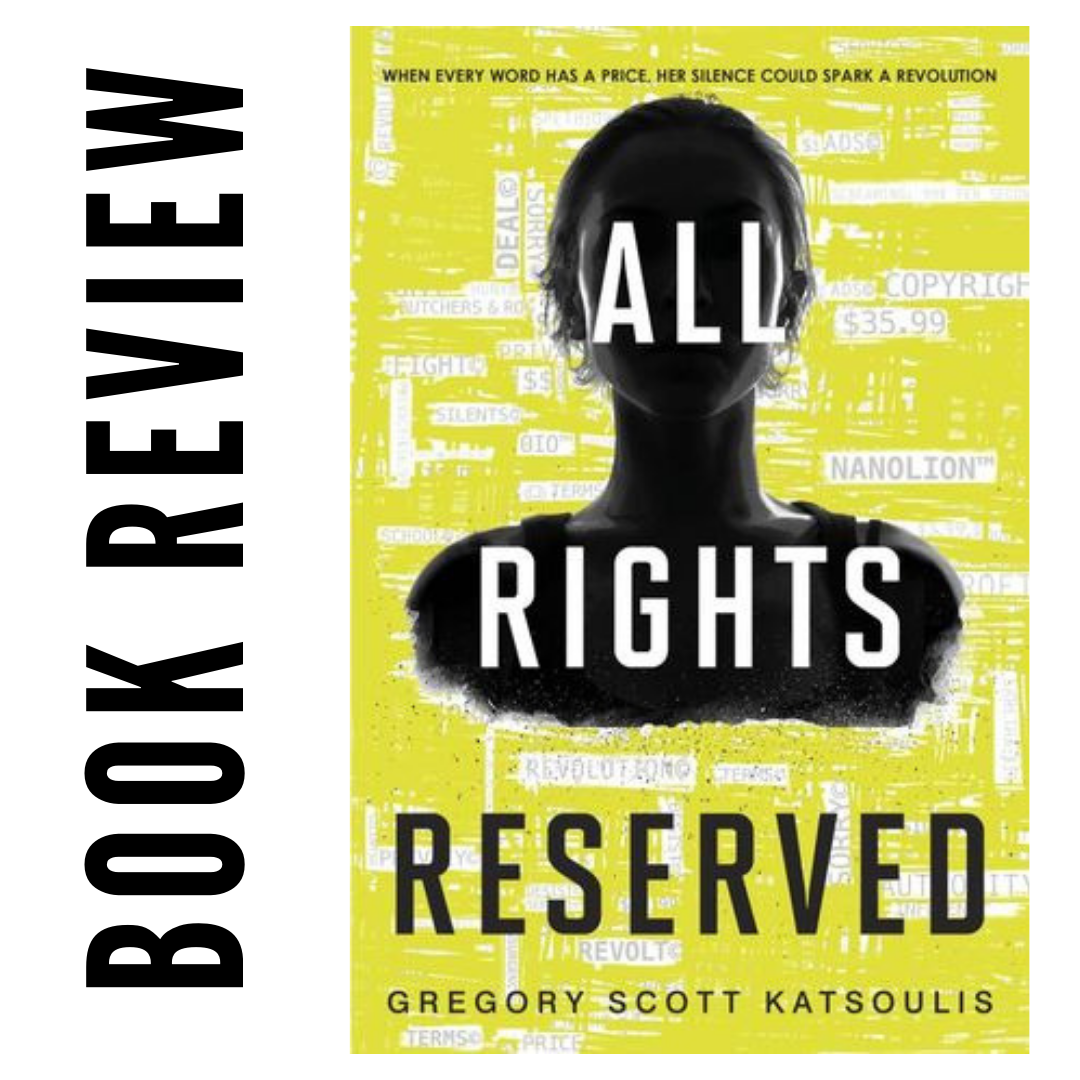 All Rights Reserved is Gregory Katsoulis’ debut book and he most certainly starts off with a bang! The story follows protagonist Speth Jime in a futuristic dystopian world where lawyers have taken control. Words, gestures and facial expressions are now copyrighted/patented/trademarked and come at an exorbitant cost. After the age of fifteen, citizens must carefully choose their words or risk falling into debt and ultimately becoming slaves of the government.

After having witnessed the death of her best friend due to the crippling debt his family faced, Speth vows to never speak again. Her silent protest sparks a rebellion as others are inspired to follow her footsteps. But Speth never wanted to be a leader, and in fact doesn’t know in which direction she should be leading people. Then there are the lawyers and citizens committed to the regime who are constantly finding ways to make her life difficult in a push for conformity. This novel follows Speth’s journey as she struggles to navigate through the consequences of her actions and decide what she really wants in life.

Review by a Surly patron & book-lover; find the book on our eLibrary here.

All Rights Reserved is different from other titles in the genre, in that there isn’t a clear goal that the plot is being driven towards. At times this can make progress of the storyline feel clunky and slow. However, I suspect this was a purposeful decision from Katsoulis; the trade-off here means that although we don’t get the fast-paced fight scenes we are accustomed to, it provides a greater sense of realism to Speth’s life. She never meant to start a rebellion, and so it would be unrealistic to expect her to immediately rise to the plate and begin leading her followers. Realism lies at the heart of this novel, making this particular plot progression not only refreshing, but also a consistent and wise choice.

Katsoulis certainly created a challenge for himself when he developed a character who never speaks for the entire duration of the novel – but he rises to the occasion. Initially it may be difficult to adjust to the lack of dialogue from our protagonist, and the one-sided conversations can seem frustrating at times. However, where other people may see this as a failure of the author, what it actually represents is Katsoulis’ ability to not only produce a captivating story but to also manipulate his readers’ reactions. The very same frustration you might feel eight chapters in, is the very same that Speth is likely feeling. This successfully connects us to her as a character in a way that other novels can never truly achieve. Likewise, given that the entire narrative is from the perspective of Speth’s thoughts and observations, this means only readers are privy to what she would otherwise be communicating to others. Katsoulis places readers in a unique position that fosters our love for Speth as a character and maintains her relatability. Without giving away any spoilers, be forewarned that Speth continuously makes poor (rather questionable) choices throughout the course of the book. Whilst some readers may find this cause for complaint, it actually adds an additional layer to the realism that Katsoulis works so hard to establish. The truth is, ordinary people consistently fail to make the perfect reasoned choice and sometimes they don’t take into consideration the impacts their decision might have on other people. This makes Speth more authentic and not as predictable as your usual YA protagonist: readers become invested in her story, you will find yourself wanting to continue following along as she makes these critical mistakes but ultimately grows from them.

This is the area in which Katsoulis excels. He manages to create an entirely foreign world that is completely different to our own, and yet it feels entirely familiar. As a reader it isn’t hard to imagine the few steps we as a society would have to take before we end up in the same position as Speth. In fact, the novel’s world is so believable because Katsoulis takes the time to develop a story of exactly how society ended up this way. Often this is where YA dystopia fall short; they simply throw readers into a generic landscape brought about by vaguely mentioned climate threats, or passing allusions to government takeovers. With this novel, readers can understand very clearly how small, seemingly meaningless, changes to our world snowballed until the very fabric of our reality has gradually eroded beyond recognition. Not only does this further immerse you in the plot, it also provides depth to some of the key themes.

Dystopian novels are defined by their ability to provide a detailed social commentary of the world we currently live in, and the one not too far in the future. However, sometimes YA fails to delve into these issues beyond a superficial glance. Katsoulis focuses his novel entirely on these key issues, abolishing the unnecessary love triangles and battles which would otherwise distract readers from the powerful messages of the book. The concept of this storyline was an incredibly inventive approach to exploring the issues regarding freedom of expression and, more broadly, how we use language in our daily lives. It makes you consider if the words you personally use have any value or if we are simply wasting them – this introspection is what makes Katsoulis’ story truly resonate with readers.

All Rights Restricted isn’t just another dreary YA dystopia, it is a story that deserves to be read by everyone; the concept is innovative and the central themes are well developed. Katsoulis produces a captivating backdrop for the relatable struggles of Speth and will leave you itching to pick up the sequel. So why not give it a try, you can find it in our catalogue here.