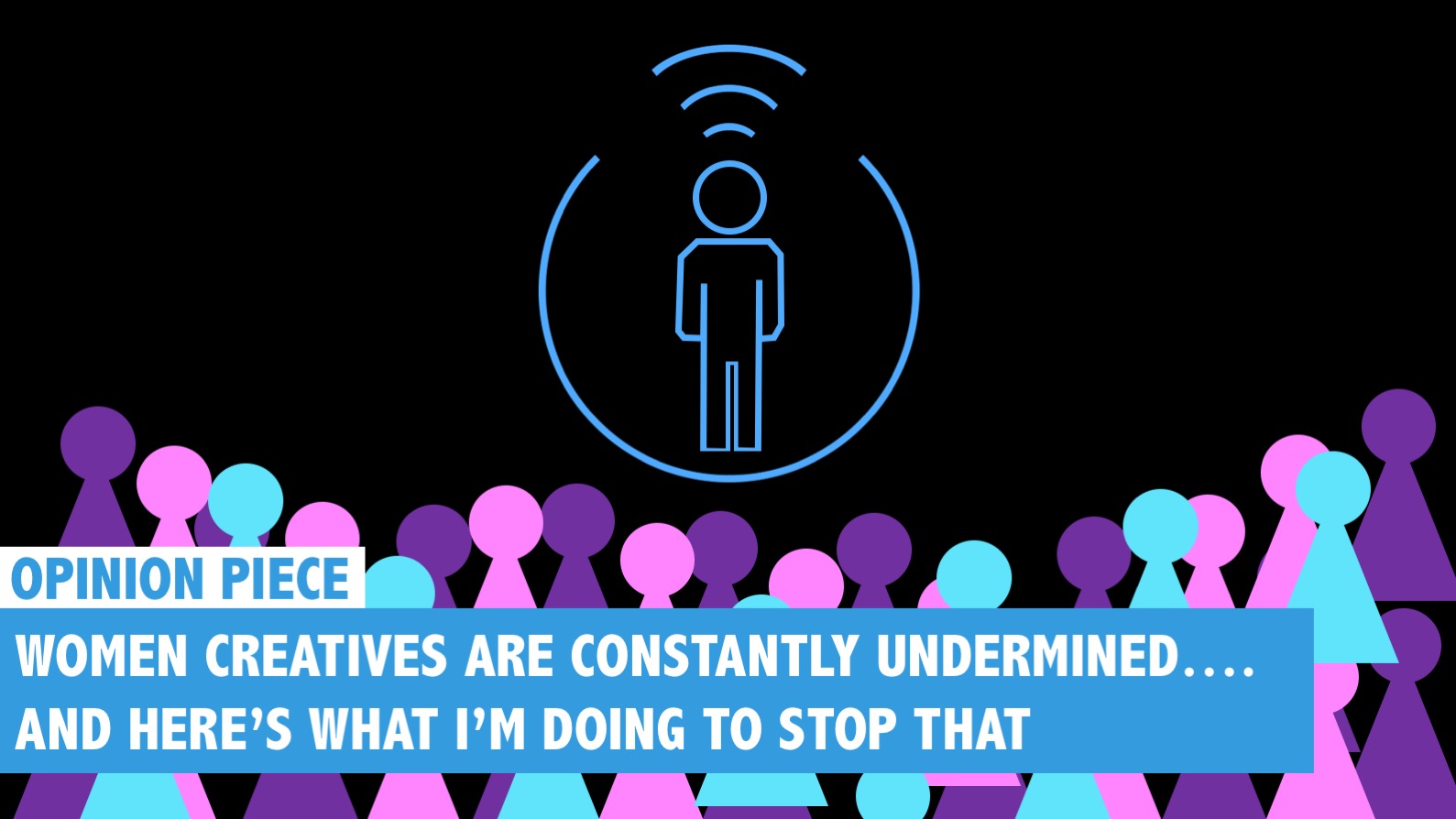 For those of you who don’t know, Radio Monash had a woman elected to the role of president for the first time in a long while at the end of last year. That woman? Me; Aleks. Third year Immunology student. Pleasure to make your acquaintance.

If you know me personally, you’d be very aware at the fact that I’m goal and task oriented. You got a problem? Let’s work out how we can fix it. What’s in my control? What cannot be avoided? What can I start on immediately to work away at the issue? Along with avoiding micro-management at all costs, my other long-term goal for the year is to ensure that Radio Monash grows and flourishes as a space for all creatives.

Creatives being those who work within the arts, including screen, music, culture, and design. When I use the word all, I’m not only referring to the industries themselves, but the type of people that work within them; specifically, women, but inclusive of LGBTQIA folk, people of colour, disabled folk and those of low socio-economic status, and especially those who identify at the intersections of these identities.

While I’m thrilled that persons of minority identities have been “breaking the glass ceiling” if you may in certain industries, whether it be Mahershala Ali in his role as ‘Best Supporting Actor’ in Moonlight at the Academy Awards earlier today, or Viola Davis for ‘Best Supporting Actress’ in Fences after her third nomination this year, there is still plenty of room for growth. And yes, Hidden Figures, a film about three black female mathematicians forgotten by history who were responsible for literally sending a man to orbit around the Earth, is a box office smash. Not to mention Moonlight, a film about being queer and black, took home the gong for ‘Best Picture’ tonight. And while all this celebrated diversity fills me with momentary glee, I know deep down that these industries are far more sinister than meets the eye.

Need I remind you all that Casey Affleck, star of Manchester by the Sea, has been accused of not one but two incidences of sexual harassment by two experienced women creatives in the industry, and has taken home both a Golden Globe and an Oscar for Best Actor?

And is the whole world suddenly suffering from amnesia or do I not recall that Mel Gibson, welcomed again into the Hollywood movie making industry with open arms, is anti-Semitic, as well as physically and verbally abusive to women and LGBTQIA folk? Oh, but his film Hacksaw Ridge just took home ‘Best Sound Mixing’ and ‘Best Film Editing’ at the Academy Awards. Not to mention you have the leader of the free world, President Donald Trump, using his position of power to devalue the honouree of this year’s Golden Globe for a lifetime of notable work, calling Meryl Streep ‘over-rated’. But where were the public calls of criticism for people like George Clooney, who also used his celebrity to criticise Trump and his administration by comparing his presidency to that of the McCarthy era? How about De Niro, who literally detailed his wanting to punch Trump in the face via a video posted on the internet? Or the man behind the #Drumpf hashtag, John Oliver, who has spent hours tearing apart the now President for who is really is on his show?

Allow me to delve into the music industry for a moment, considering Radio Monash’s primary service is, as the name suggests, radio. Pop sensation Kesha had her case dismissed by a judge in 2016 against producer Dr Luke, also known as Lukasz Sebastian Gottwald, to remove herself from the business of the man who had sexually assaulted and emotionally manipulated her for years. And while hip-hop and R&B are largely undermined as genres because of racist assumptions and bias, women, specifically women of colour, can barely make a dent or a name for themselves without their femininity being called into question.

I was having a conversation with a man very close to me regarding Grime artists and the sub-genres rise to mainstream. While we discussed some big names like Stormzy, Wiley and Skepta, I spoke of a recent Lady Leshurr gig I had attended. Upon mentioning the femcee’s name, I was met with eye rolls and comments about how female grime artists aren’t meant for the genres because their voices aren’t made for the genre. And women can’t be tough like Stormzy can.

And Beyoncé, a woman that I hold so dearly and close to my heart, was frequently undermined and torn down by certain members of previous committees of Radio Monash, committees who by constitution, had a responsibility to ensure that Radio Monash works towards gender equality. I’m not too sure how using arguments rooted in misogynoir to devalue the artistic voice of a generation, specifically the voice of women of colour, is at all constructive to the notion of equality and inclusivity. But that’s just my opinion (also how in the hell did Beyoncé’s prolific body of work lose out to Adele’s lack lustre collection of songs? We all know the answer to that one.)

While we’re on the topic of Radio Monash and previous committees, I cannot emphasise enough how much work we have to do. I might be shooting myself in the foot by doing this but I’d rather lay it all out on the table and let you know that as President, I have nothing to hide and everything to work towards when it comes to my goals and aspirations for this community.

In our most recent history, our committee has mostly consisted of men. Our membership has slowly been creeping towards an equal number of men and women, but our space has seldom been shared by non-binary and trans folk. And while words were said about our space being safe for all genders, little work was done. When attempts were made, it was largely dismissed, by members of previous executive positions too mind you. That individual even went as far as calling into question a woman of colour’s sanity when she was rightly angered by a lack of action on a particular task that affected all members, as well as being insulted by another male member who later apologised, but even so, felt it commonplace enough to refer to her by a sexist turn of phrase.

For years, shows hosted by men were largely revered as the crème de la crème of Radio Monash’s grid, and journalism teams run by men often subconsciously promoted the work of other men, in what I like to call the ‘Pitchfork effect’, where the erasure of art created by women is largely erased because a writer’s base largely consisting of men can seemingly only appreciate the artistry of other, well men.

I’ve had friends tell me to leave Radio Monash. Former committee members tell me there’s no point. Why do I care? Women aren’t less interested in radio or music, despite what your subconscious bias might be telling you. Women deserve a space to be creative and celebrate their talents and contributions. I’m reminded of the fact that my whole childhood, I was supported as a woman creative. I was encouraged by women music teachers to use my talents to tell my stories. I had male theatre teachers who chose me for roles to tell the stories of women from all walks of life. But as soon as I walked into the Radio Monash space, I could tell I was not welcome there.

Why does this matter? Because when you undermine the work of a woman, you undermine her existence and her autonomy to live freely without harm. The start of the university calendar year is known as the “red zone” where women on campus are most likely to experience rape. Women should be able to enjoy a creative space as much as her male counterparts without the fear of having her wellbeing and reputation destroyed.

Over the summer break, some incredible organisational changes were made. Our constitution now reflects the importance of inclusivity and the fact that discrimination will not be tolerated. We also have a membership agreement which emphasises the importance of respect for the space, fellow contributors and our collective moral compass. We are working with the MSA and Monash University to educate this year’s committee and wider community on matters that are important to minority groups. We renovated the space and have completely revamped our media presence. This was accomplished by women creatives and a handful of incredibly supportive male allies.

Despite the fact that I’m a biology student, where my contributions are frequently undermined in the classroom and STEM fields are rampant with sexual harassment and assault, this is important to me. Even though in my current field of hospitality, I am constantly called “sweetheart” by older male customers, leered at by male co-workers and have my work put into question (like the time a customer asked me whether I should be on the grill because women apparently can’t cook meat properly), this is important to me. The majority of customers that walk into one of my jobs are women, because we’re seen as the caretakers who have to feed the children a nutritious meal, while those men that do walk into the store usually start off with a story as to the “missus putting me in charge of dinner tonight”.

It is important to me because music and writing have always been my creative outlets. I shouldn’t have to fit neatly into the woman in STEM label. I should be allowed to live my life and have a space where my creative contributions are celebrated, and where I too, can celebrate the creations of other people like and unlike me. As numerous studies have shown, diversity makes us stronger and smarter. Radio Monash has nothing to lose by opening our doors wider than ever before and not only inviting women in, but recognising and appreciating all we have to offer.

If at any point throughout the year, you see something that isn’t right, please contact me via a.djukic@radiomonash.net. These matters are important to me so if you have any criticisms, or feel as though you could contribute to rewiring a sexist culture, please contact either myself or our Community Officers via community@radiomonash.net.